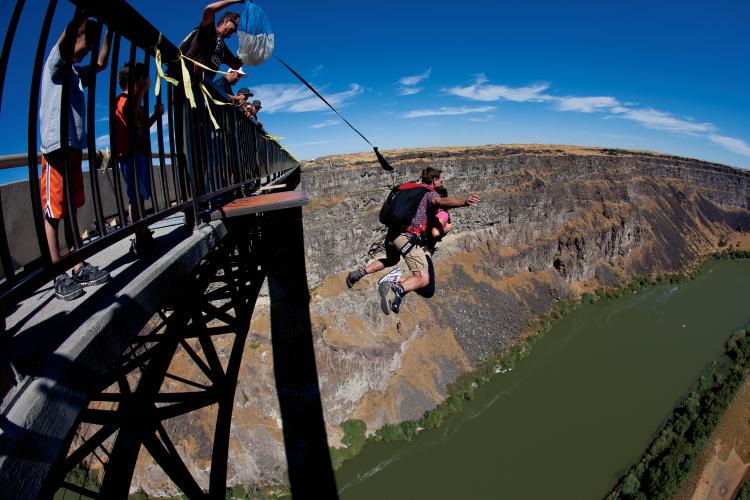 Need to raise your adrenaline level? Livability.com scoured the U.S. for some of the best adventure cities we could find off the beaten path. We went digging for extreme sports cities, surf cities, rock-climbing cities, even haunted cities. What we found were places that not only provide thrills and chills, but cities offering high quality of life. While we can’t promise they’ll kill you, all these places can at least give it a good try.

Our first adventure offers thrill-seekers a chance to channel Indiana Jones on a 2 1/2-hour treetop canopy tour. Fayetteville, NC’s ZipQuest zipline tour was named one of 10 best by USA Today, with eight ziplines, three canopy bridges, three spiral staircases (including one suspended from a cable) and climbs as high as 80 feet. The course centers on Carver’s Falls, a 20-foot tall waterfall previously closed to the public. Stretching 150 feet wide, it’s the largest waterfall in the Central and Eastern regions of the Carolinas. Set amid pristine North Carolina forestland, the tour offers an eco-adventure that explores a hidden ecosystem with exhilarating zips through a remarkably steep landscape.

Savannah, GA, makes our list not for its extreme sports but for its extreme spookiness. Known as the Most Haunted City in America, the city has a few skeletons in its closets. Savannah’s oldest inn, 17 Hundred 90, is said to be haunted by the ghost of a lovesick former inhabitant who threw herself from the balcony after falling in love with a visiting sailor. Until recently, guests of room 204, her favorite haunt, were required to sign a waiver stating that they wouldn’t get a refund if they left in the middle of the night.

The Sorrel-Weed House, one of the Travel Channel’s Most Terrifying Places in America has a history that includes an affair, a suicide and a hanging, and its own ghostly YouTube channel to keep up with all its spooky happenings. Needless to say, ghost tours are pretty popular in Savannah, but travel at your own risk – history can be a killer.

Didn’t know about Texas’ surfing culture? The Corpus Christi, TX, area along the Coastal Bend gets some of the best waves in Texas. While there are plenty of secluded spots, the premier surfing spot is also the biggest party beach: Bob Hall Pier, which produces consistently perfect waves.

On North Padre Island, waves are usually waist to head high. Corpus Christi is a premier destinations for wind sports such as kite boarding and wind surfing due to it having one of the highest average wind speeds of coastal cities in North America. Regular surfing is one thing, but thrill-seekers around here have a tendency to grab their board during the frequent tropical storms and even hurricanes coming in off the Gulf of Mexico. Lucky for us, they also record their breathtaking adventures.

Motocross is a big deal in Stillwater, OK, which has three major motocross sports destinations full of rugged hills and classic Oklahoma red dirt. Extreme destinations such as Area 51 Motocross Park attracts thousands of visitors each year for rides along the property’s drastic elevation changes and many hills. The 160-acre Cooperland Raceway, owned by off-road racing veteran Guy Cooper, brings in competitive racers from across the country for track events as well as cross-country races.

Stillwater Motorcycle Park, locally called “The 500,” is known for off-road motor biking on more than 500 acres of red clay and dirt. Stillwater also lays claim to “Cowboy” Kenny Bertram, one of the best-known freestyle motocross riders in the nation.

Learn more about the action in Stillwater’s outdoor scene.

Located 40 miles north of Salt Lake City, Ogden, UT, is a growing center for skiing and adventure sports, and a gateway to Snowbasin, Powder Mountain and Wolf Mountain ski resorts. But sorry, skiing just isn’t death-defying enough. We’re talking about skydiving, and Ogden has it.

The real-deal, 120-miles-per-hour freefalls are at Ogden Skydiving Center, which offers everything from tandem jumping to advanced dives surrounded by mountains and the Great Salt Lake. For an indoor version, there’s iFly’s vertical wind tunnel. And how’s this for bona fides? The Rockwell Airtime team, an Ogden-based crew skydiving team specializing in vertical formation dives, won gold medals at the 2010 U.S. Parachute Association National Skydiving Championships.

Want to fit in with the daredevils of Traverse City, MI? Find a spot on one of the area’s many lakes and beaches, strap your feet into a surfboard, attach yourself to a kite, and enjoy the ride. Traverse City’s consistent winds make it one of the best places anywhere for kiteboarding, which uses wind power to pull riders across water (and air), where they can perfect their wakeboarding moves, try jumps and stunts, or even carve tracks in the snow.

At the center of the scene is Broneah Kiteboarding, offering popular two-day weekend camps from June through September to learn the basics of kite-boarding. Feeling even more extreme? Try the snow kiteboarding classes offered each February on the frozen Grand Traverse Bay.

Discover more on sports and fun things to do in Traverse City, MI.

It’s hard to argue with a name like Killpecker Sand Dunes. One of the largest active sand dunes in North America, the desert-like landscape stretching for 100 miles just north of Rock Springs, WY, is a nature-made, giant sandbox for death-defiers.The dunes are popular with hikers but are a huge draw for off-road vehicle enthusiasts. Dune buggies, dirt bikes and ATVs get 11,000 acres ““ nearly 20 square miles ““ in a designated open play area.

Most dune areas have smaller dunes and flat areas for beginners, but the nearly 109,000 acres also provide plenty of dunes more than 100 feet tall ““ some up to a mammoth 150 feet. If the landscape isn’t extreme enough for you, just stick around ““ the steep ridgelines are constantly shifting as winds rearrange the dunes.

Long before James Franco grossed out moviegoers portraying an actual mountaineer’s adventure gone wrong in 127 Hours, another real-life explorer found himself between a rock and a hard place with even more gruesome results. In 1925, cave explorer Floyd Collins got trapped 55 feet underground with his leg pinned under a boulder in Sand Cave, located near Mammoth Cave in Glasgow, KY.

Attempts to rescue him created a media sensation, but Collins died after about 14 days underground.Modern-day explorers can crawl, climb and squeeze more safely through the world’s longest cave system on a variety of tours.

Even the tour for non-death-defyers includes a segment known as “Fat Man’s Misery,” but thrill-seekers will want to go all out for the Wild Cave Tour, a 5 1/2-mile, “extremely strenuous” trip through the cave system’s small passages and openings that are off limits on traditional tour routes.

With a foot in pursuits from whitewater rafting and skiing to rock climbing to cyclocross, daredevils in Bend, OR, hardly know which way to go. In the summer, rock climbers flock to the world-renowned faces of Smith Rock. In the winter, Mt. Bachelor with its annual average of 370 inches of snow brings skiers, snowboarders and snow tubers from all over Oregon, Washington and California.

The powerful Deschutes River, which runs through the heart of the city, offers rapids up to a Class 5 level for daring rafters or kayakers. There are even stretches classified as Class 6, which can’t be rafted at all because of their extreme danger.

As if that weren’t enough, Bend also hosts the USA National Championships for cyclocross, a bike sport focusing on riding many laps of a short course featuring wooded trails, steep hills and obstacles.

Bend, OR, also made our Top 10 Manly Cities.

It doesn’t get more death-defying than Evel Knievel – and in Twin Falls, ID, the stuntmaster extraordinaire nearly met his match. Knievel attempted to jump Southern Idaho’s 500-foot-deep, quarter-mile-wide Snake River Canyon on a steam-powered “skycycle” in 1974, but crashed when his parachute malfunctioned.“I was nervous,” Knievel admitted in an interview before his death in 2007. “I don’t know anyone else who would jump that canyon.”

Maybe not, but plenty of people would – and do – jump into that canyon. Twin Falls’ 486-foot-tall Perrine Bridge spanning Snake River Canyon is the only bridge in America one can legally parachute from anytime, no permit required. Thousands gather to watch thrill seekers make the jump each September at the Perrine Bridge Festival. Seven people have died while base jumping from the bridge since 2000. The state has restricted bungee jumping off the bridge.

Learn about more exciting things to do in Twin Falls, ID.