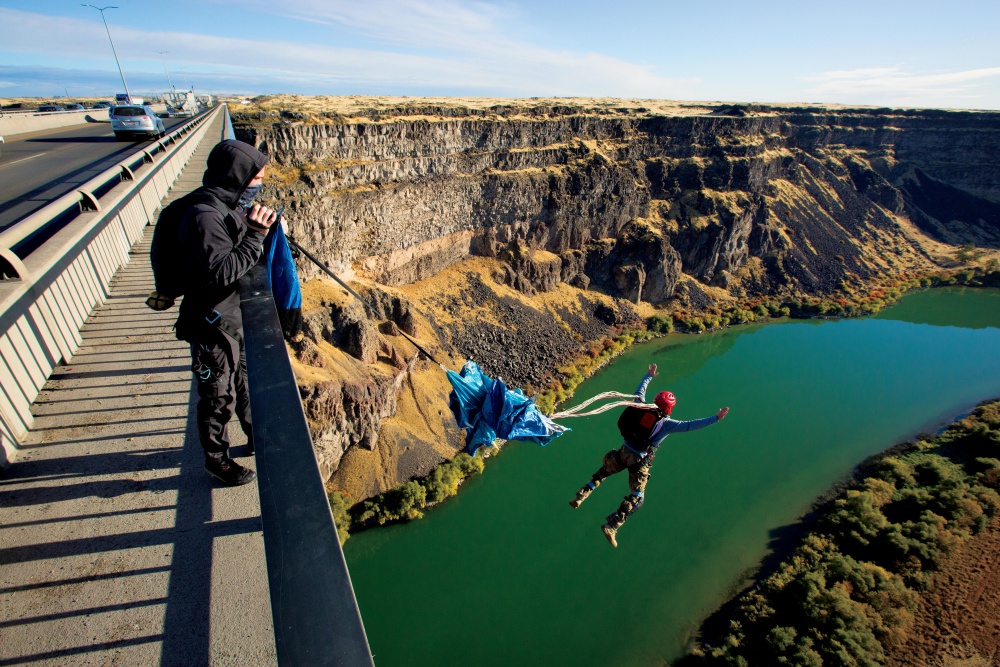 Fire and rain literally forged the geography of Southern Idaho, as the combination of ancient volcanic lava flows and a major flood created a visually vibrant landscape that also is home to a wide variety of plants and wildlife. As a result, the region is filled with natural wonders, as well as premier hunting and fishing opportunities.

“There is a lot of really cool country around here,” says Kelton Hatch, regional conservation educator with the Idaho Department of Fish and Game. “It offers a little bit of everything. There’s great scenery, big-game hunting, and some of the best fishing in the Rocky Mountains. It’s all here. It’s kind of a paradise for getting out and enjoying the outdoors.”

It all began millions of years ago with a series of volcanoes that helped give the region its distinctive landscape, according to College of Southern Idaho geology professor Shawn Willsey, author of the recently published book, Geology Underfoot in Southern Idaho. That was followed approximately 17,000 years ago by the Bonneville flood, considered to be one of the largest floods in geological history.

“So it’s the combination of those two big events,” Willsey says. “You had this phase of volcanic activity, which deposited the rocks and put the landscape together. And then you had this huge, catastrophic flood that really accentuated that landscape. There are some major geological features leftover from that.”

Rock Party
A prime example of the area’s unusual geology is Auger Falls, located on the Snake River just downstream from Twin Falls. Massive boulders, some as large as houses, are scattered across the area, tossed about by the flood like pieces of confetti.

“This flood was of such magnitude that it was churning and gouging and ripping rocks from the canyon wall and flushing them downstream,” Willsey says. “So some of the stark landscape and big alcoves carved out by the flood created some of the more dramatic features around here.”

Willsey said another flood was responsible for the creation of what is now known as Earl M. Hardy Box Canyon Springs Nature Preserve, a unit of Thousand Springs State Park that includes a 2-mile-long entrenched canyon that feeds into the Snake River.

“It catches you by surprise because the land is flat, then you come up to the edge of this canyon that’s about 200 feet deep,” Willsey says. “And at the bottom is a pristine spring, with all this crystal-clear cold water coming out of the head of this canyon. That’s a neat place.”

Farther south near the Utah border are Castle Rocks State Park and City of Rocks National Reserve. Nestled within the 10,000-foot peaks of the Albion Mountains, this area was formed by two separate plate tectonic shifts more than 2 million years apart, according to park superintendent Wallace Keck.

“Most of the area is just green, sharp-ridged mountains. Then suddenly you come into a cove in the range and there are these white-granite spires and giant monoliths as much as 700 feet tall,” Keck says. “This was a landmark for the California-bound immigrants of the mid-1800s. People were just fascinated with the scenery.”

Wild Wildlife
You don’t have to go to a golf course to enjoy birdies and eagles in Southern Idaho. More than 170 species of birds have been recorded in the Castle Rocks area. Lake Walcott State Park near Rupert is a nesting area for waterfowl flying north from the Great Salt Lake, including hundreds of white pelicans. And during the winter months, eagles and other birds of prey easily can be spotted nesting in the trees along the Snake River, especially near the towns of Wendell and Hagerman, also the site of the Hagerman Fossil Beds National Monument.

It is easy to access hunting and fishing in Southern Idaho as well. Hunting locations for deer, elk and pronghorn antelope can be found within 30 miles of Twin Falls. Meanwhile, largemouth bass, rainbow trout and 10-foot-long sturgeon can be caught in the Snake River and other streams just a few minutes from downtown.

“One of the great things about this area is you can see and experience a lot of wildlife and a lot of scenery with minimal effort,” Hatch says. “It’s just all around here.”